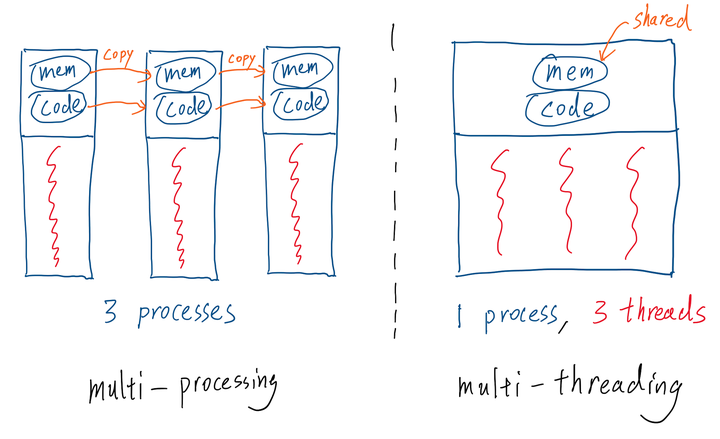 Despite having a built-in threading module, Python cannot do real multi-threading because of its infamous Global Interpreter Lock (GIL) mechanism.

Long story short, the GIL maintains a lock on the Python interpreter such that only one thread can use the interpreter at a time. As a result, any (CPU-bound) multithreading program in Python is actually executed in a single-threaded manner, or likely even slower, because of the overhead of maintaining multiple threads.

An alternative to achieve parallelism in Python is to use the Python built-in multiprocessing module. However, multi-processing is usually much heavier than multi-threading.

Process vs. Thread: To recap on the differences between process and thread, see the above figure. A process can have one or multiple threads. The main difference is that threads share virtual memory, program machine code and file descriptors; processes do not. This means spawning multiple processes using the multiprocessing package would require copying these overhead. Imagine we have a big tensor in memory on which we need to do some parallelizable computations. Using multiprocessing would make the program copy that big tensor many times into each spawned sub-processes and thus causing significant decrease in performance. Depending on the number of sub-processes spawned and the complexity of the parallelizable computation, this could cause our program to be slower than the original single-threaded implementation.

The solution: Port the parallelizable computation code to C++ and use the C++ <thread> standard library.

Step 1: Port code to C++: Writing code in C++ may sounds like a daunting task for many Python/PyTorch users. I felt the same when I first heard about it. But it turned out to be much easier than I thought was. We don’t need to write any complex Makefiles and all PyTorch tensor operations have a mapping in C++. In fact, the entire backbone of PyTorch is built with a C++ tensor library called ATen. PyTorch provide this tutorial on extending PyTorch code with C++. Some other useful documentations:

An side benefit of porting to C++ is that you get a speed-up even for just the literal translation, single-threaded implementation of your PyTorch equivalent code. This is because Python is just a slower language than C++ in general. You can read this article to learn more on why Python is slow. But to give you a preview, some of the main reasons include Python bing an interpreted language and Python being dynamically typed.

Step 2: Add parallelism to the C++ code: This tutorial gives a simple and clear introduction to the C++ <thread> library. The following example is copied from the tutorial. It shows 3 ways of constructing the thread object: using function pointer, using function object and using lambda expression.

Thread Pool: If your computation could use more threads than number of physical cores present in the machine, it would be wise to use a thread pool to re-use the threads. Recall that creating a thread has certain overhead, re-using existing threads can help alleviate this problem. Surprisingly, there has not been a official C++ thread pool implementation in standard library. But this simple and popular implementation on GitHub: progschj/ThreadPool works well. Simply download the ThreadPool.h header file and include it in your source file.

Here is an example usage, copied from the repo:

Here, the pool.enqueue() is just like the thread() constructor, it can take either a function pointer, a function object or a lambda expression. The emplace_back() call would construct and append a future object as a placeholder to the return value of the thread task. A future object is a asynchronous mechanism: its constructor will always return immediately; the thread task will be running in its designated thread; only when we call get() on a future object, will the program actually wait for the task to finish and the result to be ready. Therefore, the for loop at the end effectively serves as a join() call to all running threads. 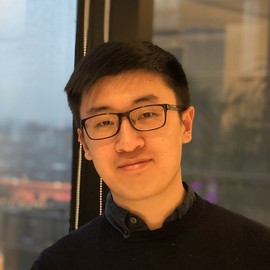